A Punjabi wedding is very much showy, lavishly celebrated, traditionally spectacular, extraordinarily expensive, having its unique charm, and is a lifetime memory filled with a lot of enthusiasm 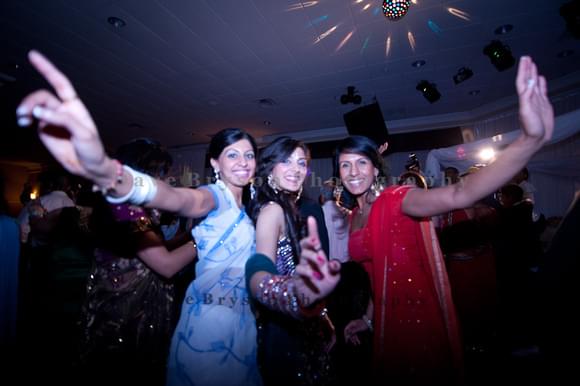 There are a number of ceremonies, functions and rituals, which are performed before and after a Punjabi wedding; and of late these have occupied a prominent place in Indian films too, e.g. Dilwale Dulhaniya Le Jayenge, etc.

The families of both from the bride and the groom sides meet on a mutually pre-decided suitable place, date and time for making a formal commitment. A ceremony is held and it is called “Roka” (Commitment). A small ‘Pooja’ or ‘Ardaas’ is performed in the beginning. It is a small function which denotes that both the boy and the girl have found their life-partners and involves exchange of sweets, gifts, dry fruits etc. between the two sides. This function is attended only by family members and close friends of both the sides.

Roka function is then reciprocated by another function on the same date. The head of the girl is covered with a well-ornate, plushy and gorgeous Red Dupatta (A sort of long scarf) by the groom’s mother and sister and close relatives. They also give cash, jewellery, and other gifts to would be bride. This ceremony is a token of handing over responsibility to the girl of upholding the honour and pride of both the families. The bangles are slipped onto the girl’s wrists.

Also called ‘Ring Ceremony’, ‘Kudmaai’ or ‘Sagaai’, this ceremony is a major pre-wedding ceremony and is organized by the groom’s family at their residence or at some other venue on an auspicious and convenient date, where close relatives and family members of the girl visit carrying with them beautifully wrapped boxes of sweets and gifts and a silver tray filled with dry fruits, and the ‘Tilak’ (Tikka) material comprising of a few grains of rice and saffron in a tiny silver bowl, and a beautifully packed fruit basket with a coconut in between. A small prayer or Ardas is performed and then the bride’s father applies ‘Tilak’ (Tikka) on the boy’s forehead, places red scarf around his shoulders, as a mark of respect, gifts ‘Kada’ (a sort of bracelet made from gold or silver) to the boy along with money and feeds dried date (Chhuwara) to the groom and blesses him. Envelopes containing money are also gifted to the family members of the groom. The boy and the girl then slip gold/diamond rings into each other’s index finger. It is followed by playing of great music and serving of delicious food for all present.

The groom’s family receives a lot of gifts during a function hosted by them. After prayer and ‘Havan’ (Lighting of sacred fire) or Ardas, the bride’s father applies ‘Tilak’ (Tikka) – as in the engagement ceremony. Each and every relative and guest from the girl’s side then offers sweets to the boy and also gives some cash and wishes for their best future. Bachelorette Party or Hen’s Party: It was not held previously but nowadays it has become a fashion in the Punjabi families where the groom and his close friends and the bride alongside her close friends participate and celebrate Bachelorette Party or Hen’s Party, before the marriage where music and dance is enjoyed and a variety of delicious food items are served.

It is held at the boy’s residence as well as girl’s residence separately in the night before the wedding ceremony. The friends and close relatives join the singing session, beat the ‘Dhol’ and shake a leg on the floor and enjoy the musical extravaganza, followed by grand dinner, to make the event filled with great fun and merrymaking.

The maternal uncle of the bride gifts a set of red and creamy ivory bangles to her which she continues to wear the same for full one year, as a symbol of good wishes. This function is also celebrated before the wedding day. This ceremony is followed by tying of ‘Kaliras’ – a sort of gold or silver plated traditional ornaments, with the help of ‘Mouli’, a sort of sacred thread on the girl’s wrists; that hang from her wrists throughout the wedding. Her maternal uncle also gifts her Lehanga-Choli/Sari which the girl wears at the time of her wedding. 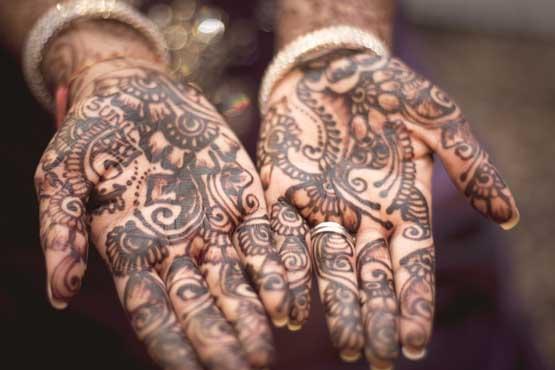 One day before the wedding day, the girl sits in front of the four oil lit lamps and a bit of paste (called Vatana in Punjabi), made of mixture of Heena powder, Turmeric powder, sandalwood, rosewater, mustard oil, etc. is applied on the girl’s hands and feet, as a symbol of good luck and fortune. It also symbolizes the love between the new couple, the darker the colour, the stronger is considered to be the love. The female friends and relatives of the girl also get the Mehandi applied on their hands and feet in various designs by the professional artists. The similar type of ‘Vatna’ function also takes place separately at the boy’s house.

Sister-in-law and brother of both the bride and the groom in two separate functions go to a nearby temple or Gurudwara where they first pray to God. A well-decorated pitcher is then filled with holy water and is brought from that temple or Gurudwara while singing and dancing on the way and that holy water is used by the girl/boy for bathing before the marriage.

The bride wears a heavily embroidered saree or a crystal Lehanga-Choli. Heavy necklaces, a gold or diamond nose ring, anklets and matching earrings are worn by her. She also gets a proper bridal make-up by a professional beautician.

After customary prayers, on the marriage date, Sehra, having flowery strings that fall and cover the face of the groom, is tied on the forehead and wrapped around the head of the groom, along with a pink colored turban and then he rides the well-decorated Ghodi (mare). The mare is fed by the groom’s sister and female cousins. Bhabhi (Sister-in-law) of the groom puts ‘Surma’ – a black eye powder - in his eyes to ward off any evil spirit. The groom’s sister catches hold of the reins of the mare till her brother parts with some Shagun money. The groom leaves for the marriage venue as part of Barat (marriage procession) with music and dance on the way.

When the Barat arrives at the venue, it is welcomed at the entrance by the family members of the bride. Rose water is sprinkled over the guests. The corresponding relatives from both sides hug each other and try to lift each other up and thereafter some also shake hands.

After this, the bride and the groom are taken to an elevated stage where they put flowery garlands around each other’s neck. After this, all the guests are served a lavish dinner, comprising of vegetarian or a mix of both vegetarian and non-vegetarian items. There are separate stalls serving different kinds of tasty food items.

After Jaimala, and before going to the marriage ‘Mandap’ (canopy), the boy has to take off his shoes. As a game of mischief, someone from the girl`s side steals the boy`s shoes, which is later exchanged for money.

At the ‘Mandap’ the bride’s hand is bestowed by her father to the groom, and ‘Pooja’ (God’s worshipping) is performed and the scarf of the groom is tied to the Saree or Lehanga of the bride. Then the duo takes seven rounds around the holy fire. The groom thereafter sets Mangal Sutra, a sort of decorated gold chain, around the bride’s neck and puts vermilion on the hair parting of the bride. The couple is now considered as a married couple and they seek blessings of their elders.

In the Sikh Punjabi families, Anandkaraj is performed in the presence of the holy book “Shri Guru Granth Sahib Ji”. The duo bows before the holy book and takes its four rounds. After that, Ardaas is performed for their happy married life.

This is a highly emotional send-off ceremony when the bride leaves her parental house for the groom’s place. The bride takes puffed rice in her hands and without turning back, throws them over her head backwards in the direction of her family signifying everlasting prosperity.

When the Doli of the newly married couple reaches the groom’s residence, then the groom’s mother performs Aarti of them and pours little bit of mustard oil on both sides of the entrance before they enter the house. The bride pushes away a pot of rice with her right foot. The couple is then taken to the Pooja place in the house where the impressions of the feet and the palms of the bride are taken on a white sheet. 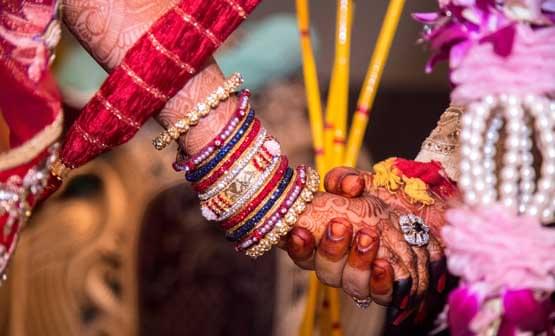 After that the couple is made to sit down and the bride is introduced with her new relatives. The whole family plays some fun games with the bride so as to make her feel comfortable. One of such games is placing of a ring in a big iron plate filled with milk. The bride and groom dip their hands in the plate and the one who comes out with the ring is supposed to dominate in their married life.

After spending one or two days, usually the bride returns to her parental home accompanied by her husband. Next day, she returns to the home of her in-laws with a lot of gifts.

This is a lavish party thrown in honor of the newly-weds by the groom’s family. Near and far guests are invited who come and bless the couple. A bridal cake is cut jointly by the couple. The invited guests have full fun and entertainment; enjoy music and dance and the delicious food.